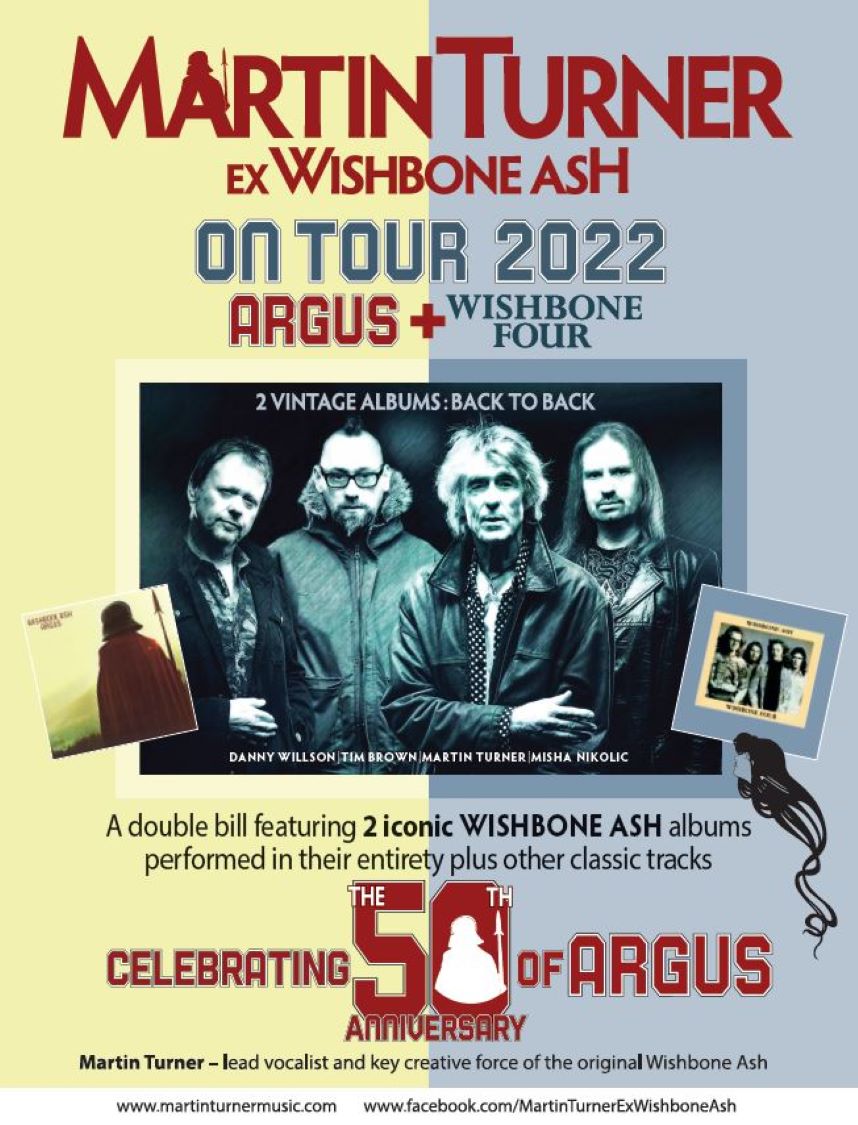 Martin Turner and his band return to the concert stages during 2022 to perform  two vintage Wishbone Ash album in their entirety – 1972’s Argus (celebrating the  album’s 50th anniversary) and 1973’s Wishbone Four.

Wishbone Ash was formed by West Country musicians Martin Turner and Steve  Upton, who arrived in London in 1969 to embark on their musical journey. Intent on  creating a musical sound that was rich in texture and melody, Martin Turner envisaged the band’s innovative harmony-guitar hallmark and guitarists Ted Turner  and Andy Powell were recruited via a now legendary Melody Maker advert. The  partnership of the original line-up of Wishbone Ash forged a unique musical identity  that would produce some of rock music's best loved works and influencing numerous successful bands, resulting in millions of album sales and concert  attendances. Wishbone Ash would become one of the most enduring British rock  acts - its name synonymous with high quality guitar-driven melodic rock music.

Five decades later, the music of the classic line-ups of Wishbone Ash continues to  delight audiences worldwide through both live performances and a rich legacy of  recorded work that continues to be enjoyed by fans old and new. Classic album  releases such as Wishbone Ash, Argus, Pilgrimage, Wishbone Four, There’s the Rub,

The 2022 tour will see Martin and his band performing two vintage albums back to  back in addition to other Wishbone Ash classics.

Featuring epic tracks such as “The King Will Come”, “Warrior” and “Throw Down  the Sword”, Wishbone Ash’s seminal 1972 Argus album achieved a #2 UK album  chart position and won UK music press “Album of The Year” awards. On its 50th anniversary, Argus remains one of the most enduring works of the classic rock era.

1973’s Wishbone Four album explored fresh territory and contained shorter songs,  a strong folk influence on several tracks, a harder rock sound on others and included stage favourites “Doctor”, “Rock n Roll Widow” and “No Easy Road”  alongside deep cuts such as “Everybody Needs a Friend” and “Sorrel”. Wishbone Four reached #12 in the UK. The 2022 tour marks the first time the album has been  played live in its entirety.

This double bill of vintage Wishbone Ash albums is an event that no Wishbone Ash  aficionado will want to miss.