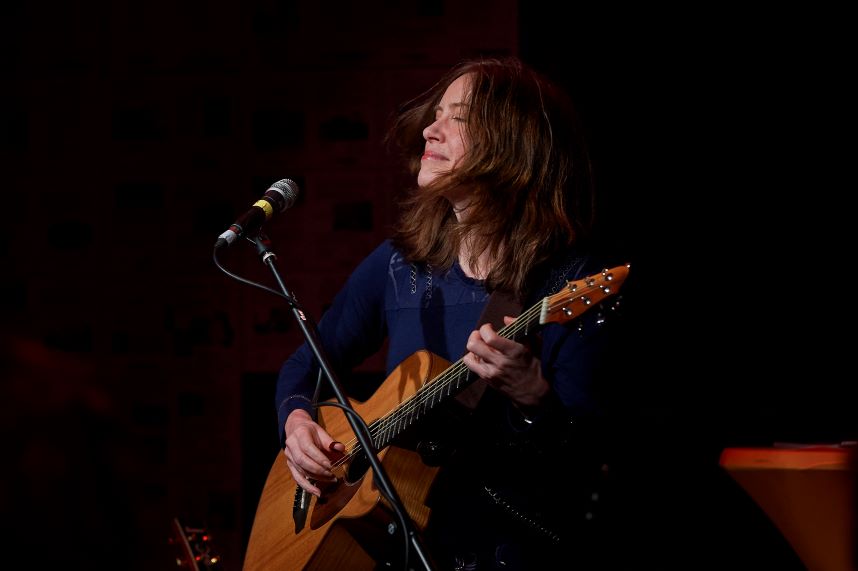 Born in Madrid (to a Spanish father and an American mother), raised in Chicago and holding dual Irish and American citizenship, Sarah McQuaid has made England her permanent residence since 2007. Her sixth solo album The St Buryan Sessions was recorded and filmed live in the beautiful medieval church of St Buryan, not far from Sarah’s home in rural West Cornwall. Released in October 2021 on CD and limited-edition double LP,  it features stunning solo performances by Sarah on acoustic and electric guitars, piano and floor tom drum, her lush, distinctive vocals echoing through the soaring space. A playlist of videos from the sessions can be found on Sarah’s YouTube channel.

In 2020, with her spring tour cut short due to the COVID-19 crisis, Sarah mounted a successful crowdfunding campaign to finance the filming and recording of The St Buryan Sessions, a full-length live concert sans audience in the beautiful medieval church of St Buryan, just up the road from the rural cottage where she and her family have been living since 2007. The first single and video of the series were released in January 2021, with the roll-out of singles and videos continuing throughout the year. The full album, with accompanying concert film, was released to widespread critical acclaim on CD and limited-edition numbered blue vinyl double LP on 15 October 2021.

WHAT THE CRITICS SAY:

“She reached parts other singers fail to do ... There is emotion, beauty, passion and musically great arrangements and fab playing. It’s a complete package. I loved the show and was very moved.” — Rob Bozas, Bozas International (Publisher, Peter Gabriel/Real World)

“Sarah was just fantastic – she had a sold out audience captivated from start to finish.” — Ards Arts Centre, Northern Ireland

“With its classy songwriting, exemplary musicianship and high production values, this is a collection to savour.” — fRoots

“I’ve died and gone to heaven, I’ve fallen in love, and any of a million other things I could say to let you know how good this record is.” — Jersey Beat

“Sarah McQuaid’s fifth full length album opens in the smoke and shadow of hanging blues tones, a blistering burn embedded in the rough electric slashes, a steady red-hot glow in the embers of rumbling picking. … A sense of unresolved mood, of shifts and shadows and intangible atmospheres pervades her work.” — Dusted Magazine

“Seeing a shared world in a new way, from a different angle, is the role of the songwriter. Sarah gets a gold star on that front. This is a fabulous album.” — The Afterword