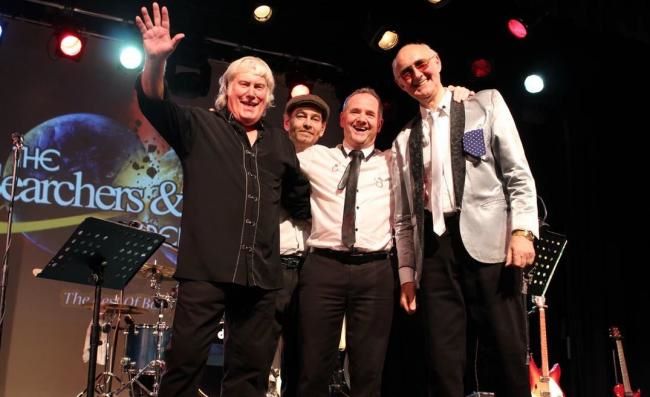 The Searchers and Hollies Experience ... The best of both worlds brings to the stage the magical hits of these two legendary harmony bands. Bringing back memories of the most high-energy decade in pop music history. Let the haunting melodies transport you to that exciting era when millions of records were sold.

The Searchers, from Liverpool, made their debut with the rise of MerseyBeat. Their very first recording, Sweets For My Sweet went to number 1 in the charts. This was followed at No.2 by their third single, Sugar And Spice. They then went on to have many more memorable chart hits, including Needles And Pins and When You Walk In The Room. They had many other hits and became part of the British invasion of the American charts alongside The Beatles.

The Hollies, from Manchester, were also pushed forward with the rise of MerseyBeat as they played many of the same venues as the Mersey groups. The Hollies are known as the most successful British singles band ever, having had chart hits in every decade since the 60s.  Catchy, melodic tunes are their trademark and they have had phenomenal chart success. Stay, I Can`t Let Go, Bus Stop, Sorry Suzanne, He Ain’t Heavy He’s My Brother, Here I Go Again, Just One Look and the haunting Air That I Breathe are just a few of their hits.

The Searchers and Hollies Experience is performed by the FOD Band who have been together since 1983. They have a particular insight into the Searchers music having backed Tony Jackson, the original lead singer of The Searchers. When Tony returned to performing in the 90s, he selected The FOD Band to back him under The Tony Jackson Group banner. The FOD band have also appeared with Eric Haydock’s Hollies, a band that Eric Haydock - the original Hollies bass guitarist - formed in the 1990s. FOD love the harmonies and the melodic material these groups recorded, and this is what motivated them to combine these two group`s hits into an exciting 2 hour tribute show featuring over 30 hit songs.