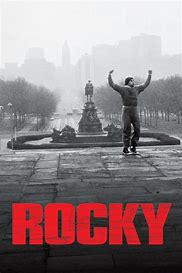 Rocky tells the rags to riches American Dream story of Rocky Balboa, an uneducated, kind-hearted working class Italian-American boxer, working as a debt collector for a loan shark in the slums of Philadelphia. Rocky, a small-time club fighter, gets a shot at the world heavyweight championship.

Written by and starring Sylvester Stallone, it went on to receive ten Academy Award nominations, winning three, including Best Picture. In 2006, the film was selected for preservation in the United States National Film Registry by the Library of Congress as being "culturally, historically or aesthetically significant".